Saw “Badrinath Ki Dulhania” few days back, and it was an enjoyable outing. Can point few flaws, if I chose to don a critic’s hat, but that’s for another day. The movie was an attempt to lynch the patriarchy and fake masculinity of the male lead played by Varun Dhawan, layer by layer. But as a feminist, I would suggest , 3 minor changes to the writers, which could have made the movie true to its feminist agenda, without reducing the entertainment value. Beware readers, spoilers ahead. 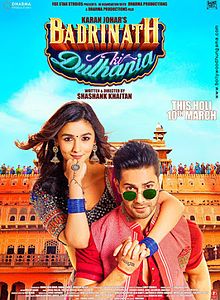 1) A scene depicted as funny, where Varun Dhawan aka “Badri” is molested by few men in Singapore. The crowd laughed but I couldn’t much. Imagine the same scene, with girl being the victim. It would have been horrific. Molestation is as bad for men as for women, if not more. Wish audiences and the writers too grow up with such sensibilities.

2) The female lead, Alia Bhatt, aspires to have a great career. And she dreams to be an air-hostess and is able to be a very successful one. Everyone has right to own a dream and is a very subjective issue. I just felt that writers could have thought off her as Pilot. Air Hostess is a little too easy, with vital stats being core to it. Being Pilot could have given more motivation to those who believe in grey cells.

3) The climax of the movie suggests that after couple of years of experience in Singapore, the girl prefers coming back to boy’s town – Jhansi and sets-up its own air-hostess Training Institute. Meanwhile for those two years “Badri” aka Varun Dhawan stays in his hometown and helps his Dad’s business. Being soulmates if both leads wished to stay together, I would have suggested writers that Varun Dhawan should have shifted his base to Singapore, where Alia Bhatt’s job was ! This would have been great message for the society where the male choses to move to the location, where the major earning partner (female in this case) resides.

In the end, this all could be nitpicking as it was just a movie, but I felt it, thus saying it !

Thanks for reading and sharing your view on the blogpost. Don't miss other interesting blogposts on Poornaviraam.com. Cancel reply