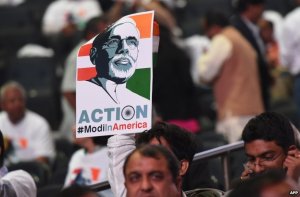 After noteworthy interactions with Bhutan, Nepal, Japan, China and Afghanistan, “Foreign Policy Champion” PM Modi recently concluded his all-important trip to USA. With the background of Visa-row by Obama Administration and enthusiastic support of NRIs for Modi, this trip was surely an important event, if not historic. Sycophantic Indian media celebrated this event with full-time live coverage of PM Modi’s trip. Rather reporting unbiased and important news from all across the world and India, they chose to be cheerleaders! Nevertheless, contemporary Indian media has been an “Epitome of Exaggeration”. Meanwhile, after keenly following his itinerary, it seems, he had 3 major agendas to push through.

Firstly and importantly, the major agenda was of marketing the “Brand India” to the US Business Community. He scored full marks by meeting the top brass of the world’s biggest corporations in US. Through this effort, he may have induced some optimism into these corporations to come and “Make in India”. Although, Mr. Modi has been trying to allay fears of these investors, he has still loads of work pending, in creating a comfortable business environment in India. I think, that all these corporations will have now huge expectations from the next budget session. They will look forward to important policy changes in India and till then, they will “Wait and Watch”.

Second Agenda, was to step up the “Brand Modi” into an important International Icon. Like Nehru, Indira, Atal and Manmohan, he wished to make a mark by being a change agent in world politics. He failed miserably with that, but he should be excused as this being his first attempt. His fluttering speech at UNGA went unheard in an empty hall. Although it was very unlike Modi, but it seems that the formal setup, global platform and a written speech format got better of him. He did come to his own midway and made some important points, but who doesn’t. Remember even Manmohan Singh recieved much adulation from its international counterparts, previously at UNGA. Funnily, Indian media lost it senses and sensationalized his speech by equating it with National pride. Indian PMs have been speaking at this forum since ages, had put better points with higher impact. PM Modi also unsuccessfully tried his hand in reaching out to US youth at “Global Citizen Festival” rock concert, but ended up boring them.

Third agenda was about International diplomacy and to revive relations with US Government which were turning sour in last couple of years. Mr. Modi averagely performed as we weren’t able to make any new breakthroughs in our relationship with USA. His dialogue with Obama was not even note-worthy by US media. But again, Mr. Modi can be excused as realists weren’t expecting anything from Obama-Modi meet. Breakthroughs like “The Nuclear deal” don’t happen every day as it requires heightened levels of diplomatic mutual trust. US is also on the verge of electing new government, and India may have to wait for their new government to up-rise the relationship.

And yes beyond all this, Mr. Modi, held a “Tamasha” at Madison Square for his supportive NRIs, who left India for greener pastures. He acted upon previous government’s recommendations and appreciably promised important benefits to them. In his traditional style, Mr. Modi ended up entertaining usual narcissistic Indian audiences across the world, through his influential speech.

To conclude, I would say, I am little vary of aggressive marketing of “Brand Modi” and “Brand India”. A overly-hyped brand with no real actions or performance, crashes faster into unrecoverable troughs. “Reel Intentions” are commendable but India need “Real Actions”!

Thanks for reading and sharing your view on the blogpost. Don't miss other interesting blogposts on Poornaviraam.com. Cancel reply